When it comes to Crayola crayon colors, collectors are never fooled.  Try as they might, Crayola's subtle changes of existing crayon colors don't go unnoticed.  Take for example the case of goldenrod.

The color name stems from the plant of the same name and is most commonly referred to as a single word.  However, it is permissible to refer to it as two words:  golden rod.


The goldenrod Crayola crayon color has been around since 1903 but was first called Medium Yellow.  In 1958 they did a lot of shuffling around of their colors and renamed this color.  It remained consistent as a single word even up to this day but in 1959 something happened that is still a mystery to this day.  When Crayola introduced their larger flat box of 72 crayons (only 64 were unique; the other 8 were duplicates of red, black and blue) they put the two word version into it.  The only other assortment sold in the United States that ever contained that two word version was one early version of the original No 64 boxes but that got changed within months and the only source for the two word version was the larger box.  The crayon color could be found in smaller 48 color assortments but never as a two word version.  Same for the 64 size other than that one anomyly.

Now, one could argue that perhaps they had made a labelling mistake.  But the two word variation remained until 1976 when Crayola moved all of their crayon wrappers to a lower-case only format and eliminated the two word version.

Adding to the confusion was the appearance of the two word version in European assortments in 1997.  They continued to use this revived variation up until 2003 when crayon production was suspended in Bedford, England in favor of consolidated production in Mexico.

The same kind of change happened with Timber Wolf.  Here was a color that was selected as a winner in their 1992 "Name the Colors Contest" and used as a two word color until 1997 when they changed it to a one word version.

But those changes were fairly easy to recognize.  Consider the case of screamin' green.  This is a Crayola color that started out life as Ultra Green Fluorescent back in 1972 when they introduced the Fluorescent specialty crayons.  The name got changed in 1990 during their decade of vast experimentation and refresh into the marketplace.  That remained constant until 1997 when all of a sudden it started showing up without the apostrophe as screamin green.  Does grammar play a role in crayon colors?  Good question!  Apparently not always.

Another example of this is the change for Purple Mountains Majesty.  Over the years they ended up with all three variations of approstrophe usage.  One with out, one as singular and one as plural.

﻿Oh, and if you think that one is a mess of subtle changes, consider Macaroni and Cheese which has had a multitude of variations.  I won't even go into all the intricate details but the picture will give you an idea. 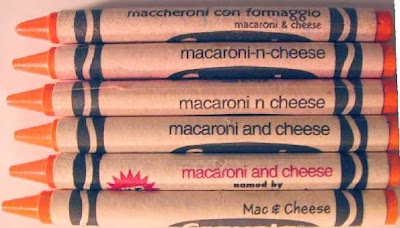 Yes, there are other examples of this kind of thing going on in the Crayola color world but suffice it to say, we collectors know what they are!
Posted by Ed Welter, the crayon historian