Back in January 1895 the Franklin Manufacturing Company launched one of their flagship crayon lines, the Franklin Rainbow colors.  They filed for a trademark registration of "Rainbow" in March of that year and the registration was official by May.
It was a good thing they did because The Standard Crayon company launched a new box of crayons that same summer with the word Rainbow in it's product name.

Trademarks protect businesses from having competitors copy or use their creative work through a name or mark for a given industry sector.  In this case, Franklin already had exclusive rights to use the word "Rainbow" for crayons; no one else could do so.

Franklin took the position to say they would litigate over the infringement and Standard backed down by making some monitary compensation and discontinuing the process on the condition they could sell out what inventory they had. 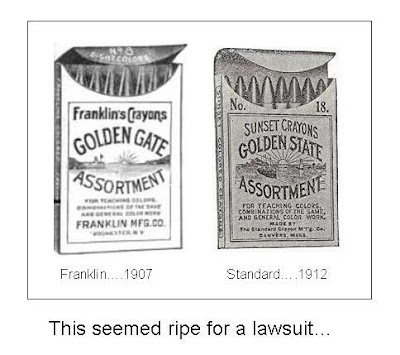 It seemed that Standard Crayon Company was up to their old tricks again and blatantly copied an earlier design Franklin was using for one of their own new brands.  Even the names were almost identical here.

I don't know if Franklin responded to this infringement or not.  The question here is whether they went through with registering Golden Gate as a mark or not.  If they did, they probably had grounds to litigate.  If they didn't, then they fell victim to Standard's apparently ruthless business practice of taking advantage of other's creative work.

Even in the crayon industry one had to be safe with their products. Crayon history is full of litigation between companies trying to leverage on other companies successes.  Imagine some low quality crayon manufacturer packaging their crayons into a box that looked very similar to Crayola's yellow and green box?  You bet Crayola will care; they don't want their brand image tarnashed by a lower quality knock off.

It's a crayon-over-crayon-color world out there and you have to be on guard all the time!
Posted by Ed Welter, the crayon historian