I've been trying for years to complete owning an example of each of the crayon boxes in the following photo:
﻿ 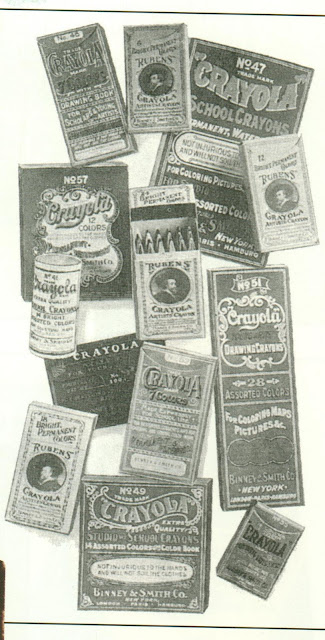 These represent most of the original boxes Crayola put out in their original 1903/1904 catalog.  All of the boxes are known to exist and I've personally managed to obtain all but two now.﻿
Many years ago I got a box of the No. 100.  It was a 14 color box that was a smaller offering to the full 28 color No. 51 box.  The colors were numbered in both of these boxes and corresponded to the same set of colors originally used.
The only problem with my No. 100 box was that it was missing the outer flap that identified it as a Crayola box.  Other than the original photo above, I'd never seen a picutre of the box.  The one in the photo is also buried under several other boxes so I couldn't get a close look at the design.  Here was what it looked like without the flap: 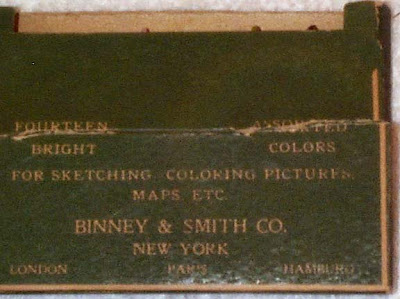 Here's what you'd see if you opened the flap.  The color numbers skip because they only selected a sampling of the 28 colors offered in the larger box. 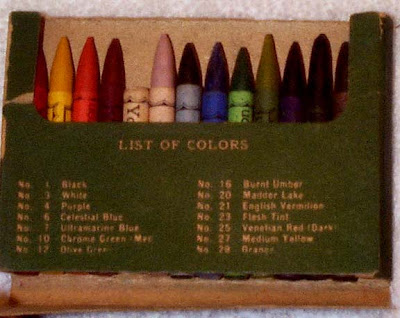 Here's an example of the back of the box.  It was very common with the earliest Crayola boxes to have a lot of text instructions about how to use their product since they were so new. 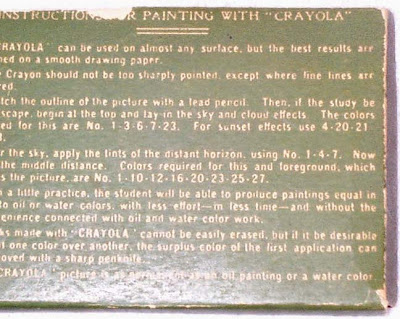 Just this last year I picked up another surviving No. 100 box with the flap intact. 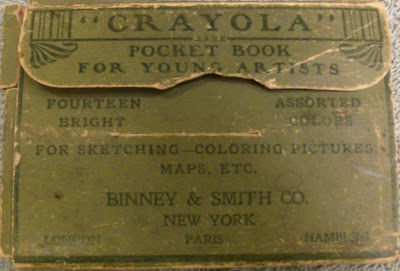 Just when I thought I'd upgraded my other box I realized that this one is different.  It has black lettering whereas my other one has white.  Apparently they changed the design of the box somewhere along the line.
Looking at the original photo it is clear that the white lettered box was the first offered.  This box had to be offered sometime between 1905 and 1919 when they discontinued using it.  I'm not clear on what year this product was discontinued.  It could have been anywhere between 1914 and 1919 based on my research.  Perhaps more evidence will surface to say.
But this proves out the old collecting adage of "just when you think you've seen everything along comes something else"
And now, instead of an upgrade I have two variations and a mystery to unfold further. ﻿
Posted by Ed Welter, the crayon historian