Update:  For a comprehensive list and story, see my web site page at Target "Pick Your Pack" Series

Keeping up a collection for a product that sells now can sometimes be extremely challenging.  As if it weren't hard enough trying to acquire those Crayola items from over 100 years ago, it seems that products that just left the retail market can be even harder to find.

At least with the older stuff, people that want to sell them recognize their age and do offer them up as collectibles.  This isn't normally the case with the recent Crayola items.

Case in point, Walmart put out a specially designed box of 64 Crayola crayon with special colors that were scented and though this was only back in 2009; only one collecter managed to find them in a store.  And nobody has seen one since.  We have literally one example saved.  Sure, there may be many, many more out there but until they actually surface into the hands of the collecting community, there's only one.

Now we have an even bigger challenge and though it's out right now, it's seemingly already too late to catch it.

Target worked with Crayola to produce a set of fun 8-color assortment boxes with special themes.  They designed 30 of these for the set and they were made to sell only in Target stores (says so right on the box).

To make matters worse, they aren't selling these online.  They can only be found at their stores.  Oh, and they're not in every store.  It's sporadic where you will find them across the United States.  Oh, and even if you do find them, chances are good you won't find all of them.  In fact, I know so.  I'll explain in a moment... 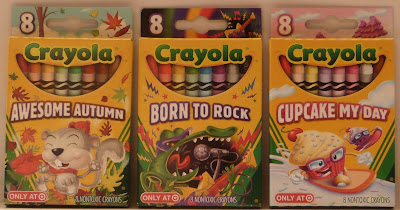 First lets set some context on how these rolled out.  They actually did a pilot for these in select stores back in November 2011. 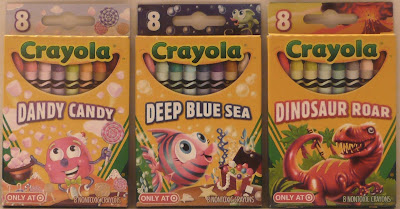 The collecting community was lucky that a private collector (Cortnie) discovered them and picked up as many of them as she could.  However, she could only piece together two complete sets of 28 different boxes at the time.  After that she put together 25 box set and then had spares of this and that particular box. 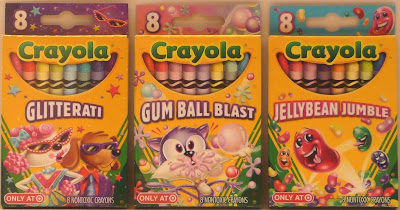 However, even though there were only 28 hangers for the mega-display these came out with, Crayola informed me that in reality there were 30 different boxes and that they weren't even out in production yet. 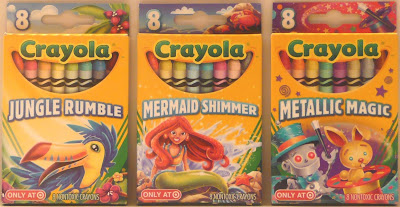 That was back in Feb 2012 and just a month before they hit the stores for real.  It turns out that during the pilot, the two boxes not found in that set were Princess Party and Rocker Party. 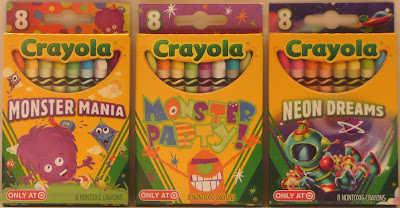 By this time I had acquired the 25 box set.  The other 28 box set went for a ridiculous amount of money; a speculation that might have turned out lucrative had the boxes never reappeared from that pilot.  However, since they did...that money was on speculation and was wasted.  They spent over $500 on a set they could have picked up for $28. 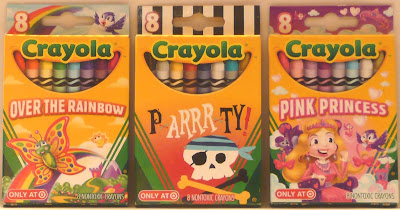 Thus is the plight of the collector.  One never knows if they'll ever see something again.  It's particularly difficult to judge when you are faced with a large set you don't even have knowing full well that it might never appear again as a full set. 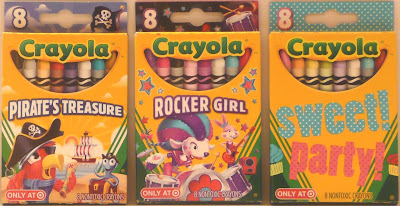 Of course, by the time I had realized these were selling and then later realized none of my Target stores were going to carry them, I took the task of documenting what all of the boxes were and which ones I still needed. 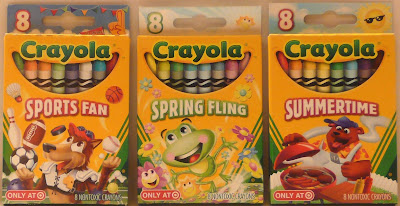 I had to get Crayola to identify the two mystery boxes, Princess Party and Rock Party.  These weren't part of the sets from the prototype sales.  Still, nobody seemed to be finding these particular boxes. 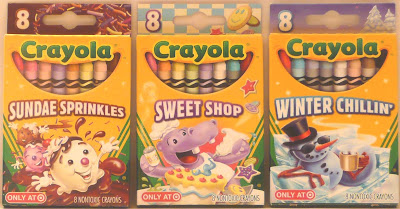 I was fortunate to fill in my own set from 25 to 27 but I still lacked an All-Star Party box.  That left me with three boxes to find.  It was time to be a little more aggresive in my pursuit. 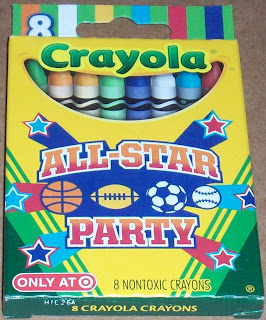 I took on the task of calling Target.  Since they only sold in stores, they weren't in my area and none of the other collectors had found them my only choice was customer service.  This stuff isn't easy, folks.  Here's my personal experience in working with Target.

Call one:  I had to work my way through their maze of automated menuing and then wait in a queue and once I got an actual person, they hung up on me.  Start over...

Call two:  I again worked my way through and got somebody on the phone.  It took some time to explain what I was looking for.  I had to actually spell Crayola for them; as if they were the only person on the planet that didn't recognize the brand name.  They put me on hold while they did some searching.  While on hold, their automated system took over and redirected me to a claims and returns office.  Start over...

Call three:  Worked my way through their menu...again...and then waited in the queue...again.  This time I explained what happened in my prior calls and they appologized for the trouble and then put me on hold.  The automated system took over...again....and I got kicked out.  Start over...

Call four:  By this time I was impatient.  I got through to somebody and told them I'd be quite unhappy if they put me on hold.  I explained why.  I went through my entire speech on what I was looking for.

Fortunately for me, I had a bunch of the boxes already and so even though I knew which ones I didn't have, they couldn't search for them by name.  So I gave them one of the UPC numbers from the back of another box.  I reasoned that if they could find where one was being sold, chances are they could find the ones I was missing.

The operator floundered around for awhile and even questioned whether there truly were 30 different boxes.  By then it had struck me that I could probably prove it.  I put my boxes in order by UPC number and sure enough, two of the numbers were missing.  The third one I needed just happened to be the highest UPC number.

Having all the UPC numbers for the boxes I didn't have, he proceeded to look them up.  We found "Princess Party" within 60 miles of me.  Unfortunately, "All-Star Party" and "Rock Party" were sold out.  Everywhere in the United States.  You just couldn't get those boxes anymore.

So, short of using my connections at Crayola to track them down, I've struck out at only 28 of 30 boxes.  The same number as the two collectors that have them from the prototype sale back in Nov.  Even they cannot get a complete set.  The best they can do is to track down "Princess Party" at another store and get that.  "Rock Party" will elude all of us in the end.

For those of us completists that want the full set, it's hard to believe that something selling right now can still be out of reach.

Thus is the plight of special make up Crayola boxes.  They come quietly and leave quietly and without the small community of crayon collectors, we might never even know they existed.
Posted by Ed Welter, the crayon historian