Crystal Blue is a color used in the Tommy James song "Crystal Blue Persuasion" but there has never been a crayon color called Crystal Blue. 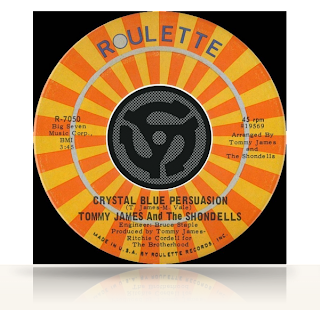 In the entire history of the crayon industry, Crayola has come up with more color names for their crayons than every other crayon manufacturer combined


William Mahoney was credited by Crayola with having the largest collection of color crayons; the distinction being that each crayon was a distinct color and individually documented.  I know William and he has no idea where they got their information but he does have an impressive color collection.  While he has probably a hundred colors I don't have, I identified several hundred he doesn't.  So while I don't collect by color per say, my collection is large enough that it does contain more individual colors than even his.  Yet providing another example of something where size does matter.


Crayola has made three different crayons named "Light Blue" and yet they are all a different color.  The first one was done for E.F. Charlton department stores prior to 1917.  The date is important because after that the department stores became Woolworths when a merger formed the Woolworths company.  Only one example of this crayon is known.  The second one was put into only the earliest No 64 boxes around 1958 and quickly pulled out because it was so close to "Sky Blue" that the color didn't seem to provide anything new to the assortment.  There is no mention of "Light Blue" anywhere in Crayola's retired or documented information.  Consequently, this is a rare crayon and only a dozen or so have surfaced.  The last version was used in Crayola's original Fabric Crayon boxes but later dropped from the color names.  Thought not particularly rare, it is no longer available and therefore makes it difficult to acquire any of the examples of this color name.

C-Rex was a color name used by Crayola for a Kraft Macaroni and Cheese promotion and there was only a single crayon made with this name; the winner of the contest.  It is unknown what this crayon looked like and nobody can be sure if the crayon has survived since the winner was allowed to keep it and no records were kept on who won. 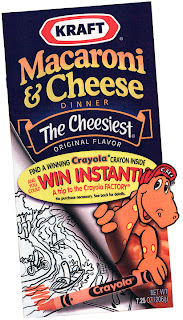 Alphabetically, the first crayon name is Acorn and has been used by both RoseArt and Sanford.  Technically, two other color names precede this but they are both "theme colors"; meaning they were colors taken from the standard color line and used in a special themed assortment box.  The first was Crayola's "Aaron McKie’s favorite - cerulean" which was a special giveaway during a Philadelphia 76ers basketball game where they added special white crayon wrappers to every crayon in a 16-color box and all of them were based on team member's favorite colors.  The other crayon was "Abra Goldenrod" which was part of RoseArt's Pokemon crayon box and contained names of Pokemon for each crayon color.


Alphabetically, the last color name is Zircon.  Crayola created this for their Gemstone crayon set and it was a metallic based color.  It's also fairly difficult to obtain since this was only released in Canada.
Posted by Ed Welter, the crayon historian