And Still More Crayola Pick Your Pack Boxes Out

Update:  For a comprehensive list and story, see my web site page at Target "Pick Your Pack" Series

Well, one thing is clear about 2013.  I'm going to have to add a special page on the Crayoncollecting.com web site to keep track of the entire "Pick Your Pack" story and the boxes in the series.

I've done several posts now trying to keep you up-to-date.  But Crayola has done it again for this summer.  They've added 7 new boxes and one box that has a minor change. 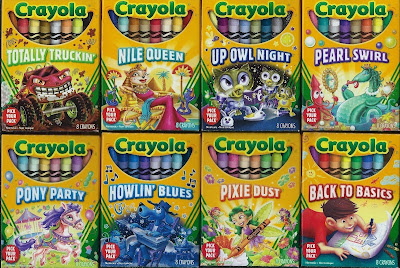 I'll have to confirm if Joe did the artwork on these.  I also need to correct my prior post because I was a little over-zealous in giving Joe credit and there were 8 boxes that weren't his artwork there that I thought were.  I'll go back and update that soon.

Meanwhile, the new boxes are:
Howlin' Blues
Nile Queen
Pearl Swirl
Pixie Dust
Pony Party
Totally Truckin'
Up Owl Night
Back to Basics (same design but with a minor change to the Pick Your Pack)

Guess that brings the box count in this series to 49 plus one more for the variation.

Not sure what colors are in these as they are so new I don't have my set yet.

For you container collectors, be sure to get the new Back to Basics box too because it has a minor change on it.

They've moved from having the exclusive at Target down in the upper left to a more generic "Pick you Pack" logo in a red circle instead.  I'm not sure if they are expanding these out beyond Target and chose to not reference the exclusive availability or not.  They are showing up at Target stores though.

This is definitely the theme these days.  Re-purpose your existing palette of colors into theme'd boxes.  All I can say is that while it drives us container collectors crazy, it is nice to have all of these to go after rather than just sitting, waiting, hoping for something new to come out.  Now, all of you individual color name collectors?  Well, it doesn't satisfy you but then again, you just did get some new Crayola color names via Facebook and their 110th anniversary box.

Look for a full feature article on the website pretty soon.  I'll continue to post updates here as they come out but I'll document the comprehensive set there.  Sort of like I do with the history of Crayola's colors.  I update that as each year passes and new colors are introduced (if at all because some years there aren't any).