How to Age Date Your Crayola Boxes

Perhaps the most common question I get from readers contacting me is on the subject of just how old a particular box of crayons is.

Over time, I figured this out by comparing pictures from periodicals, price lists and catalogs to determine when Crayola used a particular design on their boxes and when they switched that design for another.

And while there are a lot of very detailed minor changes within some of their box designs, a good time measurement can be gained using the following as your guide:

The Ornate:  This design was used on their crayon boxes from 1905 to 1928.  Most likely your box will be in the range from 1910 to 1928 as the first five years was used exclusively for the No 8 box and has an Eagle on the Gold Medal and not two people.  There are further age clues based on whether the box says "Paris" or "USA" on the bottom front.  The USA one is the newer of the two variations and didn't start until 1919.

The Triangle:  This design was used from 1928 to 1933.  There were two variations.  One where the flap has a similar design around the box number and one without.  The one without is the newer and didn't come out until 1932 which means it was only around two years and therefore isn't one you'll find surfacing that often.

The Cyclone:  This design was a short lived design that lasted only one year:  1934.  That doesn't mean it is necessarily rare as I've seen a fair amount of these surface over the years. 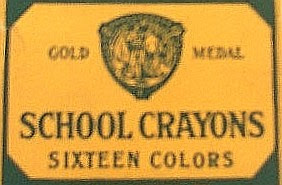 The Square:  This was used from 1941 to 1945.  I actually named this one incorrectly as it should be a rectangle but the key is that it is fairly similar in design to the Octogon versions except they squared off the corners instead and they dropped the large "C" and "A" on the Crayola and used uniform letter size. 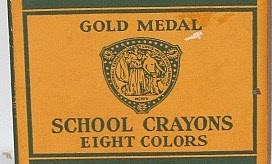 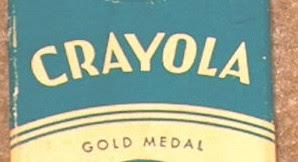 The GM (Gold Medal):  This design was used for many years.  It ran from 1950 to 1956 and there were three different variations along the way.  The earliest two were before Binney & Smith (now Crayola) incorporated in 1955 and therefore had "Co" instead of "Inc" on them.  But the earliest of those two did not have a registered trademark symbol above the Crayola name.  That was something they added in 1953.  Also important is the introduction of the "chevrons"; those angled lines on each side of the front of the box. 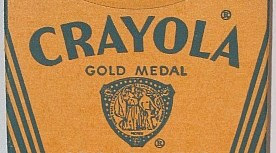 The Trap:  By the latter part of the 1980s, the company split up their crayon boxes.  Those bound for retail had hanger tabs on the top of them (except for the larger sized boxes) and those going to schools or sold commercially continued with the traditional tuck boxes.  The newly created hanger tab boxes came with a trapezoid window on them that allowed you to see the crayons.  Designs with this window get confusing because they used these windows for a lot of European boxes that doesn't necessarily correspond in date to their main Crayola line in the USA.  Similarly, specialty boxes started to come out.  Many of the Fluorescent boxes used a trapezoid window on them; even tuck boxes.  Anyway, this core design on the hanger tab boxes ran only in 1987 before they moved to a new design altogether.

The DTC (Development Through Creativity):  From 1988 to 1989 they were experimenting with a whole new logo on their boxes that never really took off and they dropped it in 1989.  But during their redesign, they also went to a much brighter green color on the boxes and this was the transition from the older color hues to the more current modern color hues.  The retail version with the hanger tab also switched over to a "smiling face" open window from the trapezoid version.

The Thick:  From 1990 to 1996 they stuck with a very basic thick font on the Crayola name to identify their crayon boxes.  During this time, the hanger tab boxes had variations of what they said in their upper right.  The earlier ones would save "Different Brilliant Colors" and the latter ones "Non-Toxic".  The latter ones not showing up until 1992.

The Rainbow Underline (RU):  This design ran from 1997 to 2002 and came with several minor variations to help break down the age of the box.  If it had big green lettering for the number of crayons in the box then that version ran from 1997 to 1999.  After that they switched to red lettering.

The Smile:  In 2003 they went with the fact that their window showing the actual crayons looked sort of like a smile with crayon teeth and they designed a mock window looking just like that.  They also added a crayon squiggle logo to their boxes.  The squiggle logo only lasted until 2005 but the smile logo continued up until current day.

The Rainbow Smile (RS):  It's a bit confusing but they introduced a variation incorporating the smile and the rainbow into a design that first appeared in 2003 and was used on various crayon lines clear up to current times.  This wasn't, however, used with their standard No 8,16, etc.

Of course, there will be more changes in the future to add on to this guide and among different sizes such as the large boxes there are different aging clues.  Similarly, their other brands and crayon lines have their own distinctions or exceptions.  But these serve as a good guideline for general age across their product offerings.