We all just think of "Crayola" now as the company and the brand.  While the Crayola brand of crayons have been around since 1903 and dominated the market since the 1920s, it is sometimes confusing that the company had a different name (Binney & Smith) and that it has had many different crayon products other than just "Crayola".  Let's take a look. 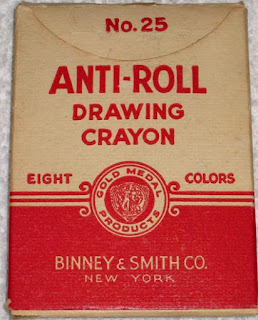 It's unclear when these were introduced, probably some time in the early 1950s given that the box says "Co" which means they were before they incorporated in 1956.  They were one of the first non-rolling crayon with a flat side to prevent them.  They hung around until late 1970s and were then morphed over into their Arista crayon line. 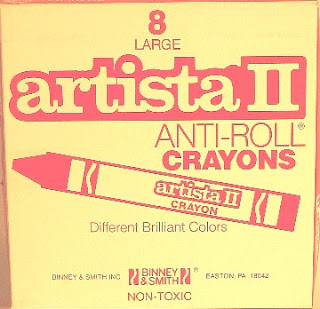 Arista is an artist line that showed up in the 1980s and carried on the anti-roll line of crayons along with other products such as oil pastel crayons.  They are still sold to this day. 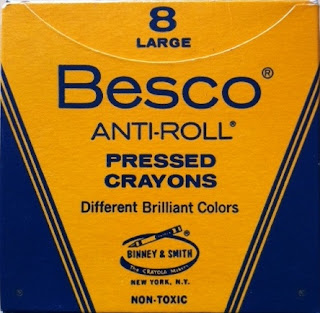 Besco was a line of pressed crayons that started in 1927.  Pressed crayons are much heavier than molded crayons and are used in artistic and industrial arenas.  The brand stayed around until the late 1970s. 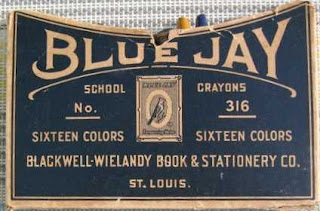 Although this doesn't indicate Binney & Smith, it was made by them on contract from Blackwell-Wielandy.  They did three known sizes and these are difficult to find. 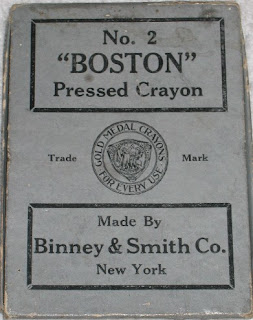 Boston was an earlier pressed crayon product than Besco.  They started this line back in 1915 and continued with them until they transitioned to Besco.  You can find Boston crayon boxes clear up to 1932 so there was some stock overlap as Besco started up in 1927. 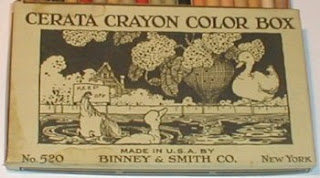 Cerata was designed as a lower cost crayon line.  This was a redo of their initial Cerola crayon line that was extremely short lived.  Cerata crayons came out in 1912 with this ornate box and later they developed more standard looking boxes that weren't as interesting as during this period of their business.  They survived into the 1930s.

Binney & Smith's first attempt at a lower cost crayon line was Cerola and this is the only known box.  It came out in 1911 and was quickly replaced by the Cerata line. 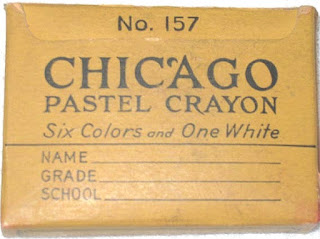 This is another extremely rare only-one-known box from their Chic'Ago pastel crayon line.  This was only around from 1930-1934. 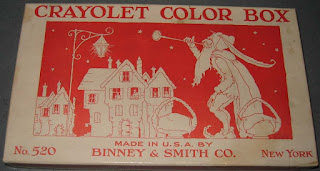 Crayolet was a crayon line sort of like a "Crayola Lite" and it was more successful than Cerata because it lasted from 1926 (with another fantastic box design that was shortly lived) to the late 1970s. 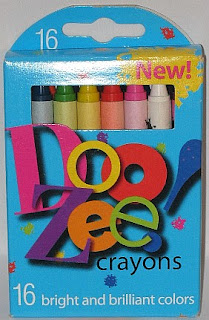 Doo Zee was their last attempt at a lower cost crayon line.  It was designed to compete with all the cheap Chinese contract crayons coming in and populating stores as house brands.  It only lasted in 2001 and as it wasn't a success they sold off the inventory of crayons to a third party and various collectors found them used in something else entirely. 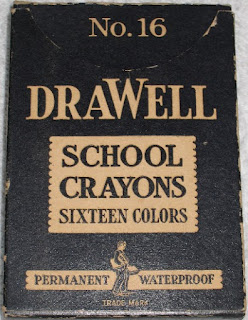 This was another contract brand with no indication that they produced it but I'd run across some documents showing so during my years of research.  It's a mystery to me as to when they started this and when they stopped but it lived long enough of have two distinct box designs over the years.  Most likely this was 1920s to 1940s. 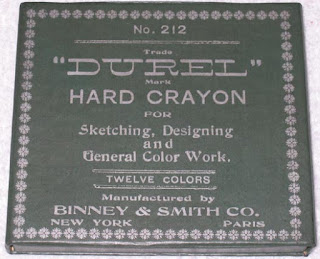 Durel was a very early pressed crayon product that was introduced in 1909 and continued up until WWII when they were having trouble sourcing colors and after the war they dropped this line completely. 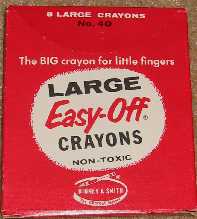 Easy-Off was introduced in 1972 as another washable crayon line.  They also moved to the larger sized crayons although they had used that size clear back in 1903 for a couple of their Rubens crayon boxes before phasing them out for decades.  This line didn't make it passed the 1970s though.

Binney & Smith has had a whole catalog of industrial crayon products going back to even a year earlier than their Crayola crayon line in 1903.  This is just one of many.  It is very difficult to know the run years for these.  This particular box, the only one I've ever seen, is pre-1956 though.

Gotham is another industrial crayon line.  There are a couple of known examples of this brand that have surfaced.  They seem to be from the mid 1950s to early 1960s. 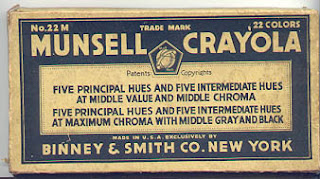 Crayola acquired Munsell Color's crayon line back in 1926.  Prior to this, Munsell was widely regarded as the state-of-the-art high end crayon to have.  Crayola has already begun to dominate the market as the best crayon at an affordable price; something they wanted to expand upon and by buying Munsell, they grabbed the high end too.  Initially, they created Munsell-Crayola and Munsell-Perma boxes using the unique colors and by 1934 phased them out and incorporated the colors into their own evolving palette. 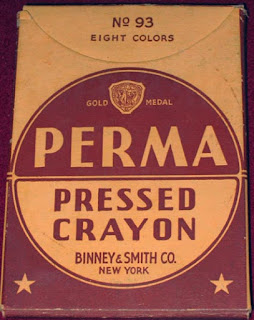 Perma debuted in 1920 as yet another pressed crayon targeted toward artists.  The crayon line survived until the 1980s.

This is another only-one-known example from Binney & Smith's industrial side of their crayons.  However, these came in a box similar to what they would use many years later for Crayola, holding four crayons.  They also used a different company name although the address is that of Crayola's headquarters at the time.  These were probably only around from 1903-1910. 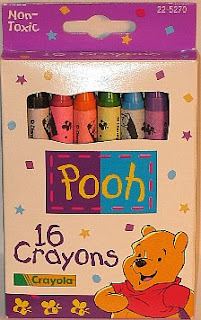 Crayola didn't do a lot of licensed characters like their competitors, but they did dabble in them on occasion.  One such case if Winnie the Pooh.  These came out just for 1996/1997 and were gone. 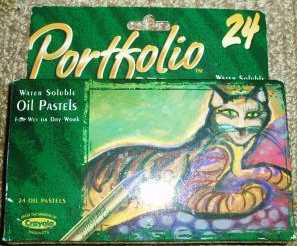 More recently Crayola started the Portfolio line of artist products which included oil pastels; a close cousin of coloring crayons as a color medium.  I'm not entirely sure when they started but they still produce them to this day. 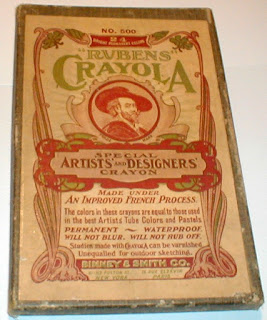 Crayola's most famous artist line of crayons was Rubens.  These started right from the inception of crayons in 1903/1904 and continued on until they were incorporated into the Crayola line around the 1930s. 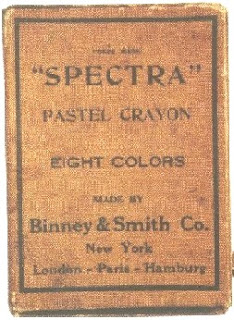 Spectra was a pastel line of crayons that went back 1917 and continued on until around WWII when it also was phased out after the war.

Staonal is the oldest crayon line the company has.  It came out the year before Crayola and is on the industrial side of their business.  It continues in various forms to this day 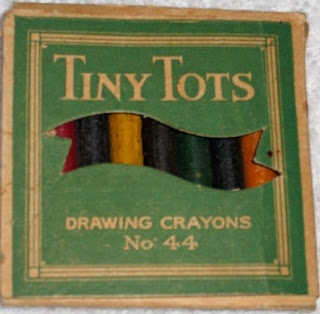 It was thought early one that little kids needed little crayons as they had little hands.  The reality is they do better with just the opposite but these were targeted for just that back in 1924 when they came out.  They only lasted until 1934. 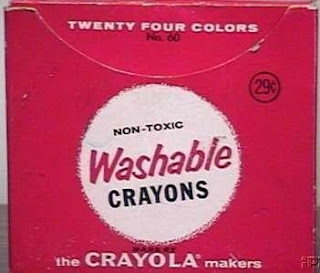 Crayola was playing around with Washable crayons as early as the late 1950s.  This line only lasted a few years though.

Here's another obscure mystery pressed crayon they did.  This was an only-one-known but has since been destroyed in a fire so now no known examples exist.  Not sure what dates this ran but suspect this box ran from 1934-1937.
Posted by Ed Welter, the crayon historian