It doesn't matter how advanced your collection gets, there is always something out there that you didn't know about and have never seen.  Case in point, even though my collection had over 60,000 crayons in it, I got an email from Phyllis Tompkins a fellow collector the other day who had found my website and wrote to share her own collection.  She had been collecting far longer than I had; nearly 30 years.  And although her collection was small in comparison to mine (I was aggressive and obsessive in my pursuit of crayons), it had a number of great boxes that I had never seen before.  I was impressed.

One of my favorite discoveries in her collection was a different crayon brand by Bliss Crayon & Color Works.  Other than also being headquartered in New York, I could never find out anything about this company.  Nothing other than the single crayon box I had in my collection.  But it was a great one.  The drawing on the back was terrific; something that most boxes don't have. 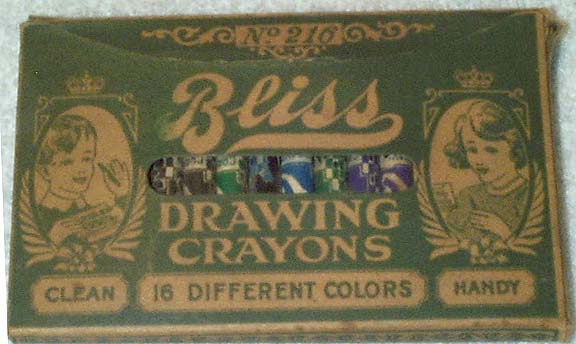 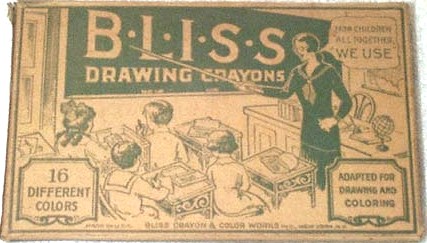 For years I had what I believed to be the one surviving example of a crayon box by this company.  Still, having collected for a long time, I knew that usually doesn't stay that way forever.

Sure enough, she had a box of Crayobar crayons from the same company!  What I find especially interesting is that this box looks strikingly like the Crayola No 16 box that they put out from 1928 to 1932. 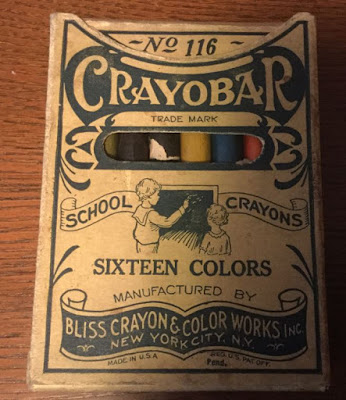 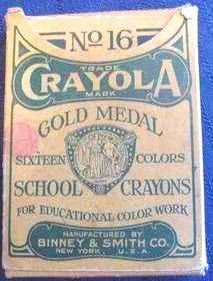 It makes for an interesting debate on whether or not they stole and capitalized on Crayola's success by using their look and feel without violating copyright laws.  Clearly Bliss Crayon & Color Works didn't steal Crayola's trademark name although their name is fairly similar.  Clearly their box has different features.  They have a window; Crayola didn't at this time in their history.  But the design around the "Crayobar" vs "Crayola", the opening tab design, the lined border and even the same color as Crayola sure shows that they were trying to capitalize on Crayola's look and feel.  At this point in Crayola's history they had already gained significant momentum in their quest for crayon domination.  Their branding efforts for a look and feel were instrumental in their success along with other factors (quality, price point, etc.).

If I saw this lying on a desk, at a quick glance I wouldn't necessarily have even noticed that it wasn't Crayola.  I wonder how much, if any, this tactic helped in their sales.

But even beyond this curiosity, this box helps provide a little more information on the crayon company.  The only thing I had going before the discovery of Phyllis's box was that based on the drawings and design of the box, it was clearly prior to 1950.  But with a patent pending on Crayobar and a trademark, now I could look those up.  Even if I couldn't find anything on them I do have the logical deduction that this would have been during the exact same time frame that Crayola put out this particular box design and that I had already clearly documented.

Alas, searching old trademarks and patents isn't easy.  Nothing came up under the Trademark database and there is no search capability in the patents for one that old.  I would have to go through an image of each on submitted within those years.  That is a bit too laborious for even me.  So, all I know now is that this company producted both Bliss crayons and Crayobar crayons and they were in business sometime from probably 1929 up to an unknown date.  This is how I help document the history of the crayon, one bit of information at a time.  Some mysteries are slower to solve than others.  But it still feels like you are a sort of private eye...