One of the most interesting Crayola boxes from my collection was this prototype mock-up submitted for the initial box that would become the No 72 line. 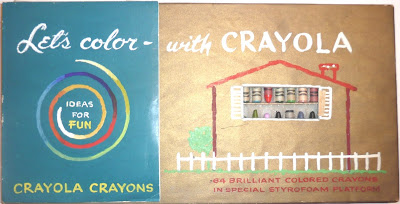 This was in 1957/58 and at a time when the Crayola No 64 was debuting.  That was the largest assortment box ever for Crayola.  This added another 8 crayons on top of that.  There were repeat colors in the box though so it didn't truly add up to 72 distinct colors but still...it would be their largest crayon box to date.

The mock up box is fun.  First of all, it has an actual multipage coloring book attached to the front of it.  The pages are blank on the mock up.  I don't know if they intended anything else because this feature never made it to the initial retail designed box.

Other differences is that the house is on the right.  Also, inside is a styrofoam case that holds each crayon into two rows of 36 crayons.  This appears to be hand made.

Another interesting observation is that this prototype includes the appearance of the rare "Light Blue" color.  This wasn't in the actual retail version.  So, just like the No 64 where that color was only in the earliest version and quickly removed, this prototype probably used what was available at that time even though later that color was removed from Crayola's palette of colors by the time this went to retail. 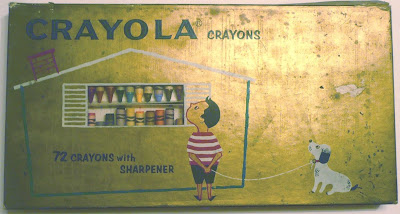 This is the first retail version of the box.  Notice that the house was moved over to the left side after they removed the coloring book.  Also notice that they added a dog on a leash to fill in the space left behind from the coloring book.  The Chimney got moved to the left side and the picket fence and bush were removed.  The outline of the house went from red to green and white.  They kept the small window but looking in to it you can see that they didn't go with the styrofoam holder for the crayons.  They are merely stacked onto cardboard shelving instead.  Probably a cost saver.  Gone are the entire design piece on the prototype box that was on the left side and they redid the Crayola name piece by removing the whole "Let's Color With" which I thought was unique. 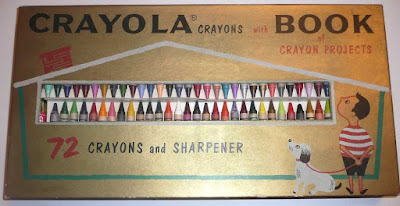 After that version they quickly moved to a version with a much wider house version that showcased a much larger window.  They also revisited adding an activity book but inside of the box, not on the outside.  This version is much easier to obtain than its predecessor while the prototype is a one-of-a-kind. 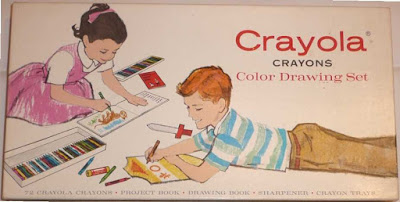 Eventually they morphed those early designs into the more familiar white box with the children on them.  There were a couple of versions of this and even some foreign variations.  The line continued but morphed into the popular boxes with the plastic crayon holders that collectors like to have (they make good individual crayon color display cases).

It's always exciting as a collector to have obtained a small piece of Crayola history... something you wouldn't think would ever leave the Crayola property and yet did.  I was honored to have owned it.