The Real Tale of the Color "Flesh"

Strange, but I thought I had told this tale in it's completion but going through my blog posts, articles and documentation on my website, apparently I never did completely do so.  So here goes...

The tale of the infamous Crayola color doesn't start with the picture above and the renaming to "Peach".  It begins much earlier.  Back to the origins of Crayola in 1903 when they put together their initial colors and dispersed those out into a number of boxed containers.  At that time they had 38 original colors.  "Flesh Tint" was one of those and that was the original name used for this color.

The color was available in their No 51 box but those crayons didn't have the color names on the wrappers.  They instead published a crayon number and you had to look at the box where they had the names associated with each number. 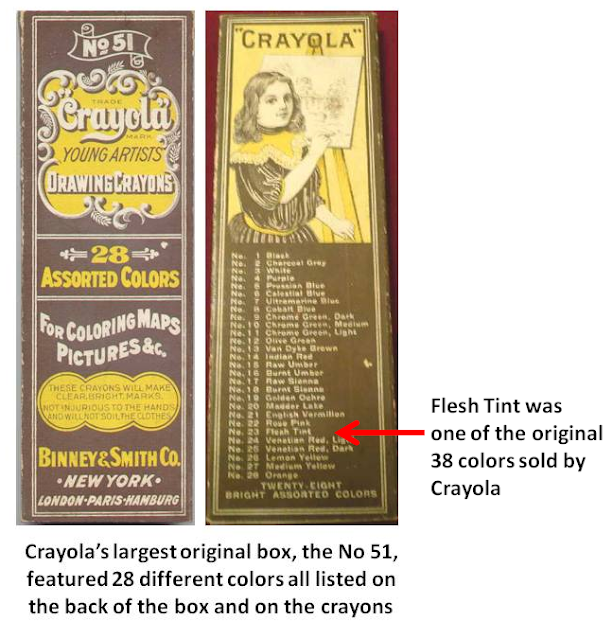 They did put the color on an original crayon but it was on the Rubens Crayola line.  The color names weren't put lengthwise down the crayon wrapper though.  The design of the Ruben's Crayola called for it to wrap around the crayon instead.  Here's an original Flesh Tint crayon:

You could actually find "Flesh Tint" in the following Crayola boxes:  No 51 (see picture above), the No 47, the No 24 Rubens Crayola and the Number 500 Ruben's Crayola (which is the only version in a larger crayon size).

In 1939 they introduced the No 52 box.  This was a seminal box of 52 colors that incorporated all of their colors along with their recently acquired Munsell colors.  In doing so, they also added back "Flesh Tint". So, from 1939 to 1944 you could find the color only in this box.  This was the first and only time you could find that color name on a modern serpentine crayon wrapper. 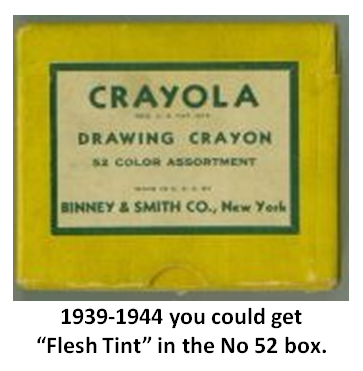 In 1949 they debuted the No 48 box with 48 colors.  At the same time, they tweaked the color line up in their No 24 box to re-introduce "Flesh".  It hadn't been in there since 1935 when it was still Rubens Crayola No 24.  It was during this introduction of the No 48 that they changed the name by dropping the "Tint" part of it to simply "Flesh" 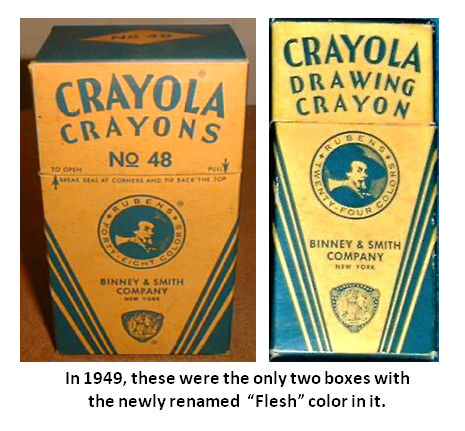 From 1949 until 1956, "Flesh" continued to be included in the No 24 and No 48 boxes exclusively.  But in 1956, a strange thing occurred.  They renamed "Flesh" to "Pink Beige".  No announcements, no fan-fare, no reason ever told.  It was short-lived too because they switched it back to "Flesh" almost immediately afterward.  Even stranger, it was never put into the No 24 even though "Flesh" was a part of that color line up. 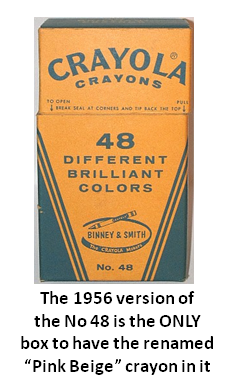 After naming it back to "Flesh", it survived under that color name up until 1962 when it was changed to "Peach".

The change to "Peach" was primarily initiated by a wonderful woman named June Handler with whom a gentleman named Marc Dollinger contacted me about.  I corresponded with her back and forth in 2014 when she was 91! She was doing doctoral research back then on "An Attempt to change kindergarten children's attitudes of prejudice toward the negro". She had always been concerned about black/white prejudice, especially in young children. In her abstract, the children who were five would make derogatory remarks about those who were black and she tried to help them understand prejudice and what it does. 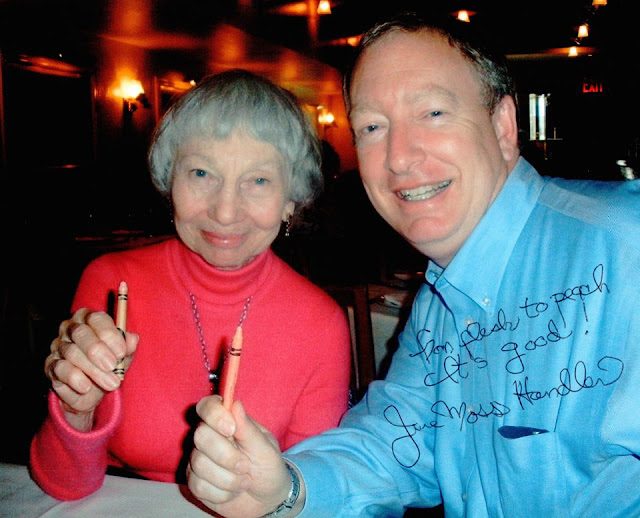 At that time Crayola had "flesh" which was kind of pinkish and some of the white children would taunt some of the black children with "you don't have flesh". She wrote Crayola and explained the situation and what it did to young children. She suggested they change the name. And they did...almost immediately (this took effect in 1962).

They used her words in their museum where they show the crayons that had changed over the years (Flesh, Prussian Blue, Indian Red). Her son arranged a visit to Crayola later and even the President of Crayola came and thanked her and presented her with a huge box of crayons, all with their new name. Of course, Crayola still uses a generic reasoning of "because of the civil rights movement" but it was really June that lobbied them to do so.

Sadly, June passed away in November, 2017 at the age of 94.  I felt very honored and fortunate to have met and learned the real story from her.