A Look at Some Surprisingly Rarer and Valuable Crayola Crayon Boxes

If you collect Crayola containers or even if you just happened to have acquired one from somewhere and are wondering if it is common or something really special, it can be difficult to know from just looking out on eBay to figure that out.  You can go through my website data but even then there are several thousand containers by Crayola alone and it can get overwhelming.  So lets take a look at some boxes that are rare and do bring value.  Most of the ones I've chosen to focus on here aren't necessarily old.  The oldest Crayola boxes are almost always certainly rare and valuable.  I'll do a post on that subject another time but for now, let's look at some surprising examples of what collectors look for: 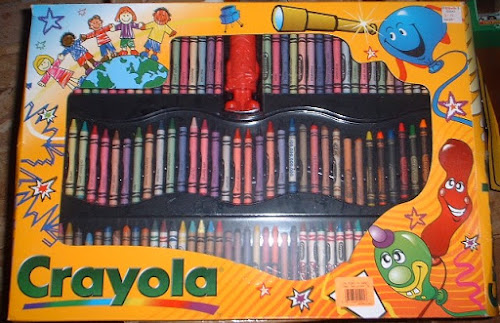 This first example is one of the largest packaging containers Crayola has ever done.  It also happens to be extremely rare despite coming out in the 1990s.  I got one from another collector when he sold his collection but in the 18+ years I was looking at what crayon boxes surfaced on eBay, Etsy and other sources, this NEVER showed up.  My box is now in the corporate archives of Crayola and to my knowledge, I don't know of another example of this.  This will definitely fetch some good money as collectors are watching for it.

This next box was a compilation of Special Effect crayons that Crayola put out in 1999 after launching many, many different kinds of "special effect" crayons in the prior years.  For whatever reason, this box has always been difficult to find.  There are a few examples out there but this box is always in demand and watched for.  In 2019 and 2020 Crayola revamped a number of their special effect offerings and put out two very large compilation boxes but even though shouldn't diminish the value of this one.  Keep an eye out for it. 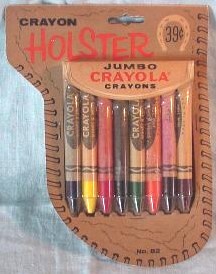 While technically this next container is a Crayola No 92 (says so at the bottom of the front of the container), everyone knows this as the Holster container.  They put this out sometime in the 1960s and it is very rare.  At the time I had mine, it was the only one known but recently I had a reader write to me to say that he had one so I guess there might be a couple of survivors out there.  Still, this is not only highly sought after but valuable as well given the uniqueness of the package.  It was a spin-off of their No 1000 series of resealable containers that they sold in the 1960s.  None of them are common and all of them are reasonably desirable but the holster sets itself apart in that category. 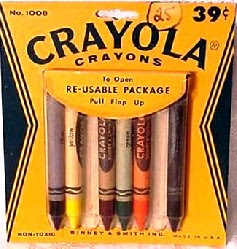 This is one of the two variations from the 1008 re-usable containers.  Any of these should be looked for as they are not common and desirable. 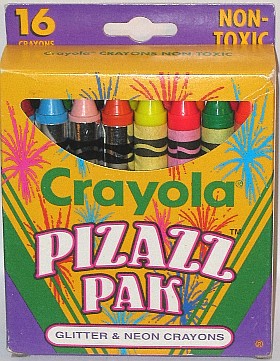 The Crayola Pizazz Pak was another compilation container that Crayola put out in 1993.  This one combined some crayons from their Glitter line and their Neon line.  In the early 2000s you would occasionally see this box show up for sale but it has gotten much scarcer over the years and is still desirable although not nearly as desirable as the Special Effects 48-color box I showed you earlier.  Still, it is one to keep an eye out for. 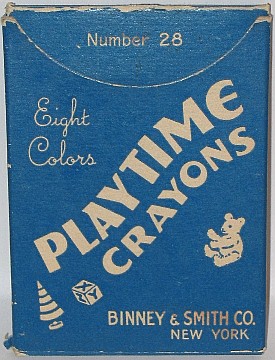 Crayola (which was Binney & Smith) used to experiment with a number of more inexpensive lines of crayons on occasion.  This one is older (pre-1956) and very rare.  In fact, the one I had was the only one I'd ever seen or heard of.  Definitely one to watch for because it might get overlooked since it isn't a "Crayola" box.

The Imagination Station boxes were a set of boxes put out by Crayola very early on in the late 1980s and feature a number of their different types of crayons.  One box has Fluorescent crayons, one has Metallic and the very first box had pastels.  These were combination assortments as some of their colors were just from their standard catalog of Crayola colors.  Interestingly, these are quite rare; they almost never surface and they bring a decent value if they do.  Good luck finding these now.

These next two 64-color boxes were commemorative boxes that Crayola did in 1998 when both Mark McGuire and Sammy Sosa were chasing and passing Babe Ruth's long standing record for most home runs in a season.  Of course, this was before the doping scandal revealed that they were taking steroids and put a damper on all the excitement of the time.  These aren't actually unique boxes, they simply added a sleeve to go over the box but these are incredibly rare to find.  In fact, they ones I had were the only ones I knew about.  I would expect some to surface at some point as baseball collectors should have snapped these up as well.  And that will add to the value of these because crayon collectors have to compete with baseball collectors if they show up on an open market like eBay. 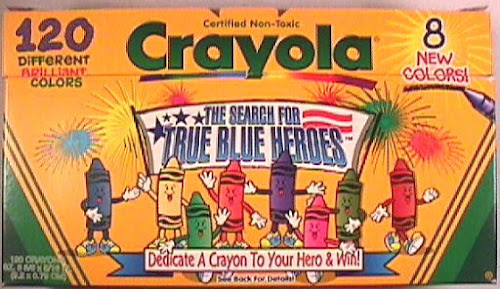 Our next box is one of the No 120 assortments.  These were among the largest assortment lines Crayola had.  Occasionally they would put out something with more crayons but not on a regular basis whereas this is a proper Crayola line that has been offered for years and with many design variations over those years.  True Blue Heroes was a promotion they ran in 1997 and they put out the promotion on a number of their assortment box sizes.  This was their largest and because the No 120 line just isn't carried in as many places as say the No 64, it is much, much harder to find  I had a friend that had one and I knew of another one but in 14 years looking, I never found one for my collection.  They are extremely rare and carry some value as collectors are looking for it. 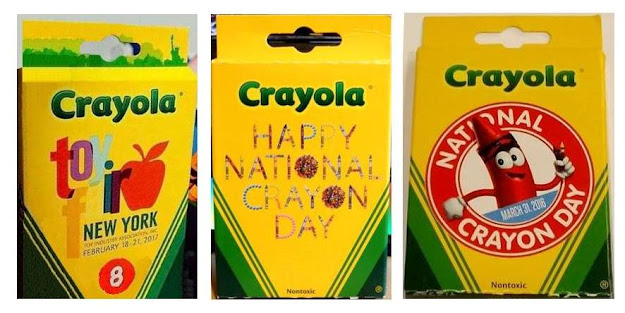 Okay, perhaps it is unfair to include these boxes as they are specially made to commemorate an event and as such, very few people had access to get them.  Still, should you happen to come across one or should they show up online, grab them if you can because they are extremely sought after by collectors.  There are others too; I've just highlighted these.  The first was a giveaway for the Toy Fair in 2017.  The Toy Fair is run annually in New York in February and is the primary venue for showing new product coming and Crayola on occasion makes a commemorative crayon box for the event.  They've done this twice that I know of.  This one is even more special because the color names are unique; they are named after famous things in New York.  The other two boxes are commemorative boxes that celebrate National crayon; a day set aside in March of every year.  On at least two occasions they've made a special box for that event.  These two happen to be from 2016 and 2017.  All of these boxes will fetch good money as collectors are watching for them. 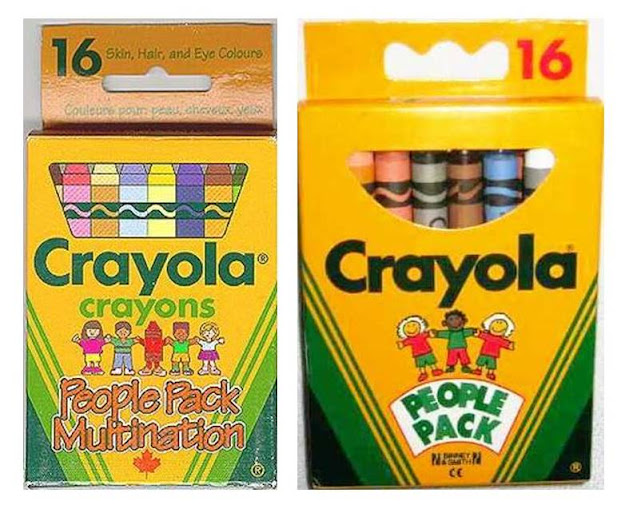 These next two People Pack boxes are probably unfair to feature as well because there are simply so many Canadian and European Crayola boxes that are hard to get.  But collectors really focus on the various lines of Crayola's efforts at addressing diversity with their crayons.  I chose to focus on these because they represent an effort in Canada and the UK that are quite rare among the many other diversity lines Crayola has done.  The Canadian one is by far the most desirable and rarest of the two but both are desirable and tough to find.  It could take many years for one to surface. This box is older but certainly not part of their original line up.  I featured it because it is an only-one-known and I have preached in the past that this box is a complete mystery to me.  I had the box but it doesn't follow any of Crayola's assortment line designs.  Sure, they used that logo at the top on some boxes but never in a green box.  This was an 8-color box.  They already had their No 8 and the various design changes in that are well documented with not real gaps in time that this one would have been used.  This is one of those boxes that could easily get overlooked even though it is extremely rare and mysterious.  Watch for it. 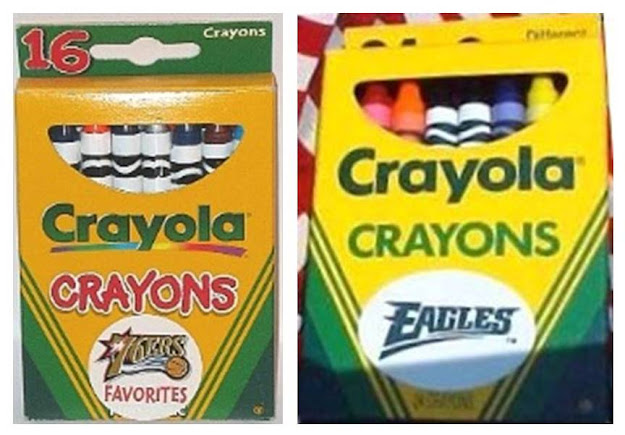 These next two boxes are actually quite common boxes but Crayola chose to replace some or all of the crayons in them with special sport-themed crayons to promote sporting events.  The first one is the most desirable because all of the crayons in it are unique.  They slapped a 76ers sticker on the front and these were either given away at a game or sold at the game; I'm not sure which.  As far as I know, I had the only one that has ever surfaced to the collector community.  Each crayon had the name of a Philadelphia 76ers player's favorite color on it.  The second one was also for a specific game.  One of the Philadelphia Eagles football games.  I'm not exactly sure when this was.  Only one has ever surfaced.  It showed up in the early 2000s on eBay.  I bid on it but made the mistake of not bidding enough and somebody else won it.  It might have been a football collector.  None have ever surfaced since.

I have featured this box before.  It was an only-one-known that a fellow collector friend of mine had.  His collection burned in a tragic house fire and so there are no other examples of this known at present.  This was obviously from the 1960s when the space age was of interest to everyone.  This was a one-off of the Crayola No 72 line and it is not only extremely rare but also equally desirable. 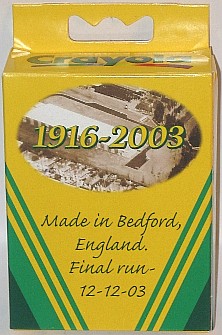 If you around collecting in 2003/2004 you might have had an opportunity to get one of these.  It was the final run box Crayola did in Bedford, England.  That was (and still is) their European headquarters and for decades they actually made crayons there.  These are much harder to find now and kind of a sentimental box for crayon collectors as it marks the end of an era. 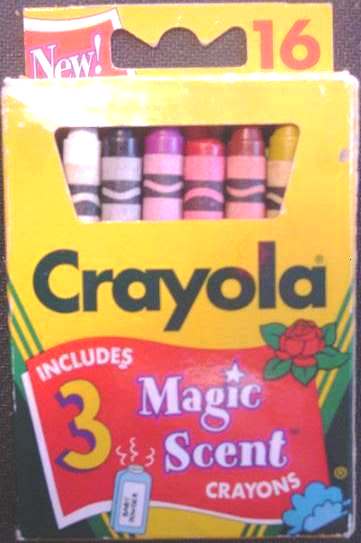 This is another European box and it occasionally shows up..  It featured 3 Magic Scent boxes and as that has morphed into Silly Scents these days, it is still a desirable box to find although it won't command a whole lot of money. 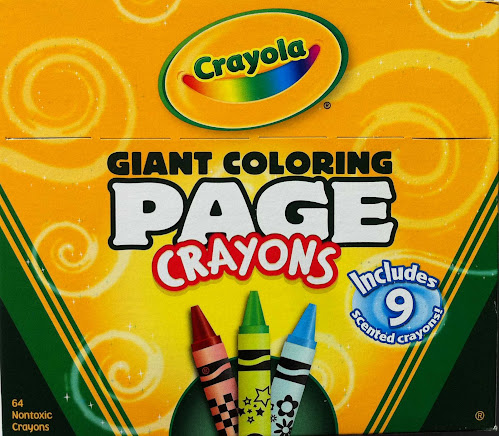 I missed this box back in 2008 as it was a Walmart exclusive.  What makes them valuable is they have a set of 9 uniquely named scented crayons in it.  It took me years to find one of these.  There are a couple of them out there but it is very hard to find and will fetch a little bit more money as a result.

There are many, many other boxes I could feature here and I certainly haven't covered the older stuff but this should help you identify some of the rarer and desirable boxes Crayola has done.  Now good luck finding any of them!