I try and document all containers containing crayons.  Sometimes those aren't so obvious as just an ordinary box of crayons.  For example, Art Sets frequently had crayon in them.  So did pencil boxes which were also called pencil cases, student cases or school cases among other names. 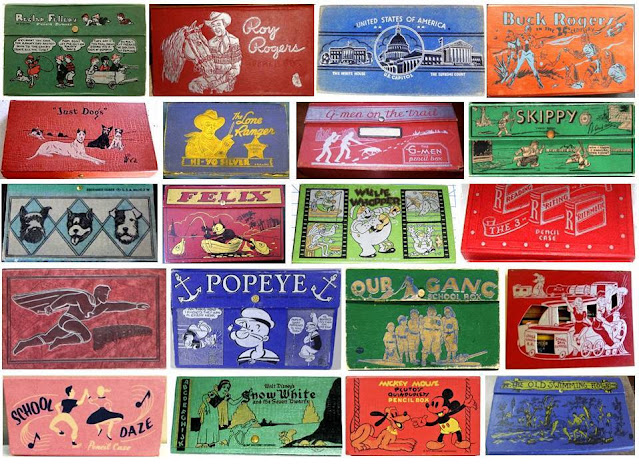 Collecting vintage pencil cases would make an interesting subset to collect.  There are a lot of them!  I've documented over 300 so far.  They come primary from three different pencil companies:  Eagle Pencil, American Pencil and Joseph Dixon Crucible.  Each of these companies used some of the earliest licensing deals for their products.  Dixon started really early with Disney; right about the time their first full feature animated movie came out in 1937.  As for the others, they looked to radio serials and comic strip characters for their licensed designs.  There were a lot of designs done for Mickey Mouse, Popey, Our Gang, Felix the Cat, The Lone Ranger and many more.  In addition, each of them also had a number of one off designs around a theme.  There were some minor player companies as well.  Eberhard Faber and Hassenfeld Brothers both did a few of these cases.
When collecting these, you'll find that they did each design in a number of colors.  It's very unclear just how many they did for a given design but the most common were blue, green and red color variations although they had five or six other ones that might have been used.

The cases almost always had a button fastener for the top.  They may have contained one to three different storage levels.  Nearly all of them included crayons as each of these companies made both crayon and pencil products.

I have a running compilation of all of them here:  http://www.crayoncollecting.com/Article-PencilBoxes.htm

These cases run from the 1920s into the 1950s.  After that they seemed to have switched to regular boxes or flimsier vinyl cases and other ways of packaging school supplies.  I focused just on those vintage ones.
If you decide to take on collecting these, good luck and enjoy.  If you happen to find one I don't have documented, please email me from my main home page.
Posted by Ed Welter, the crayon historian